We Actually Asked #FirstGen Students What They Think About Education. Here’s What They Said: - SFER

We Actually Asked #FirstGen Students What They Think About Education. Here’s What They Said:

Take a look at the reporting on education out there. Here’s what you’ll see: policy research, debates, straight up hissing fights about public charters vs. traditional schools, reformers vs. unions, DeVos vs., well, everyone.

Beyond all this clutter you never hear what students think about their K-12 experience — especially recent grads who can speak to if they were prepared for college or not.

At Students for Education Reform, we conducted a survey of 1000 first generation college students (FGCS) from across the country to actually ask them what they think about the K-12 system they just went through. We noticed there wasn’t any data out there on this topic.

FGCS are the first in their family to go to a four year college or university. Overwhelmingly they are low-income, and more likely to come from low-performing schools. These students are often the first real shot that families have in upward economic and social mobility, so in a very real sense they represent the “American Dream.” But their voices are never looked to for answers. Until now.

Follow the link here for the full report of our first-of-its-kind poll. Here are the highlights:

1. First Gen Students think teachers and faculty should be rewarded and penalized based on performance. 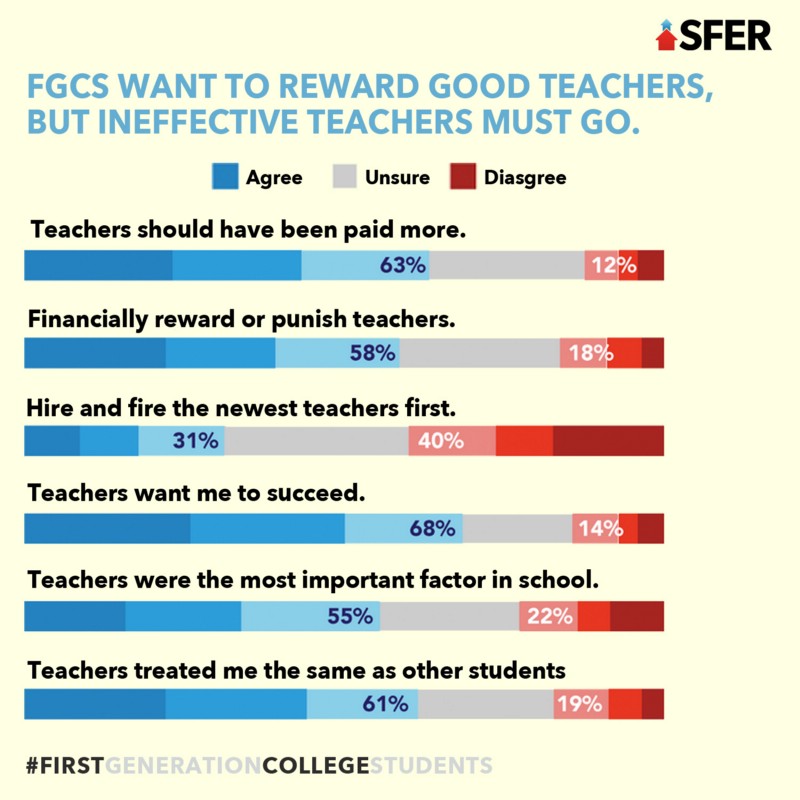 Many FGCS had great teachers, and not so great ones. We asked if teachers should be paid more, and we also asked if they should be rewarded or penalized for performance.

The majority of FGCS said “Yes and yes.”

Makes sense to me. To draw talented people to the classroom, we’ve gotta make it more attractive ($$$) to our college grads. I’m talking big teacher pay increases. And then, those teachers have to prove results for the kids they are tasked with educating. 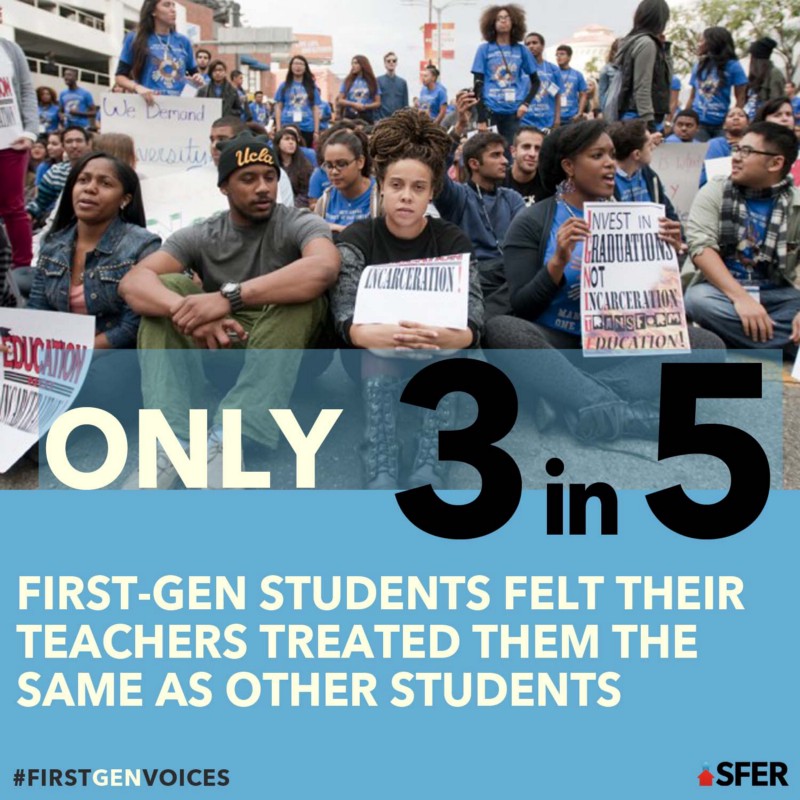 A sizeable minority of FGCS (30%) said that their high school was not an emotionally safe or inclusive place and that they weren’t comfortable expressing their full identity. This number is way too high. Schools need to be a place that affirms the dignity of every student. More attention needs to be paid to supporting undocumented students, LGBT students, Muslim students, and other groups at higher risk of being alienated socially and academically.

Here’s one student speaking their truth:

“My school in Houston was absolutely terrible. The teachers didn’t care to teach the material or alter it to the class to make it fit. On top of that there were metal detectors every morning and knife fights during lunch. I did not feel safe nor was I learning. Then there was the bullying because I wasn’t the same as everyone there.” –White, Female, LGBT, Public School

3. First Gen Students think testing is important, but there are too many tests. 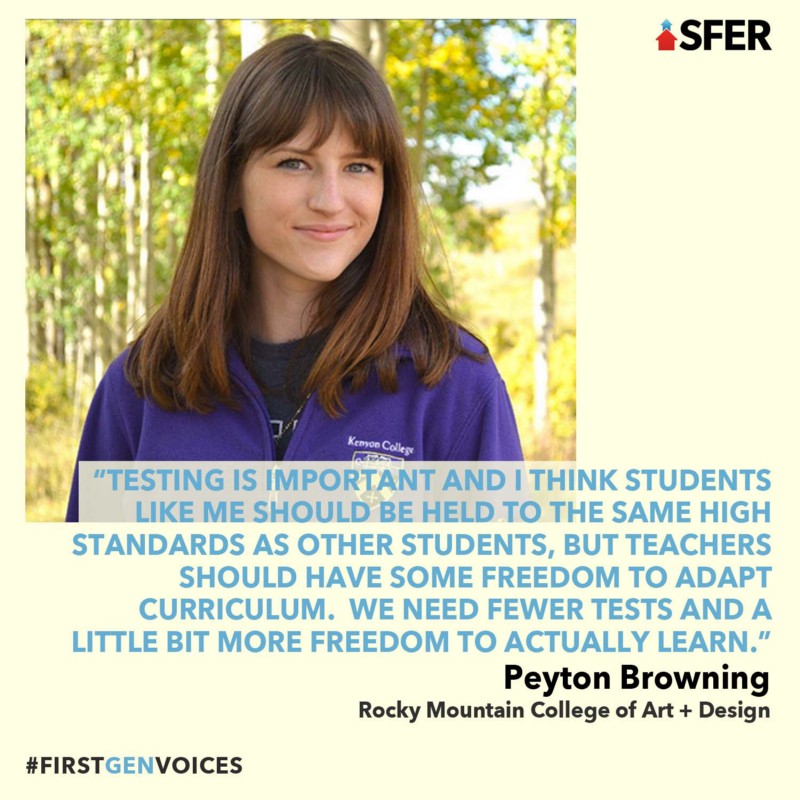 The majority of FGCS say testing is important, but 61% say they spend too much time taking standardized tests.

This point is remarkably nuanced. Students aren’t challenging the fact that they need to be evaluated to ensure that they are learning. They know the importance of proving results. But policy makers should take some serious notes, here — many of the tests we have are redundant and they’re not helping teachers improve. We can reduce the amount of tests by aligning to high standards with a few really good ones. 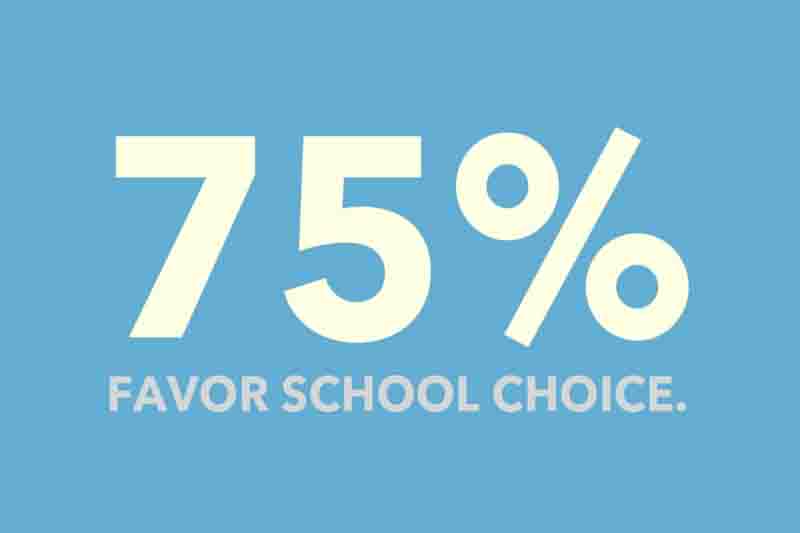 75% of FGCS support school choice and almost half of them said they would have chosen another school than their high school had the option been available. Even though most coverage on school choice has been negative (thanks, Trump and DeVos) it’s clear here that the idea has support from First Gen students. Check out another quote from our survey:

“I probably would have performed better academically if I was in an environment that promoted academic success. My overall performance doesn’t represent what knowledge I knew or had the potential to learn.” — African-American, Female, Public School

What’s clear from the survey is that students want school choice, but not the type the Trump Administration is talking about. They said they’d choose another school for things like better academics, safety, and teacher accountability. None of these key components have been part of the Trump/DeVos plan, and that’s really a shame.

I learned a ton from this survey. Most importantly, that #FirstGenVoices need to be at the table for a deeper conversation with actual students affected by bad K-12 schools

In the name of upward mobility, learning from what FGCS have to teach us is absolutely necessary if we’re going to move forward.

Are you a First Generation College Student? What resonates most with you? Not #FirstGen? Tag a friend who’s the first in their family.

Questions about the poll or Students for Education Reform? I’d love to hear from you. Reach out to Jon on Twitter at @jonphebert.